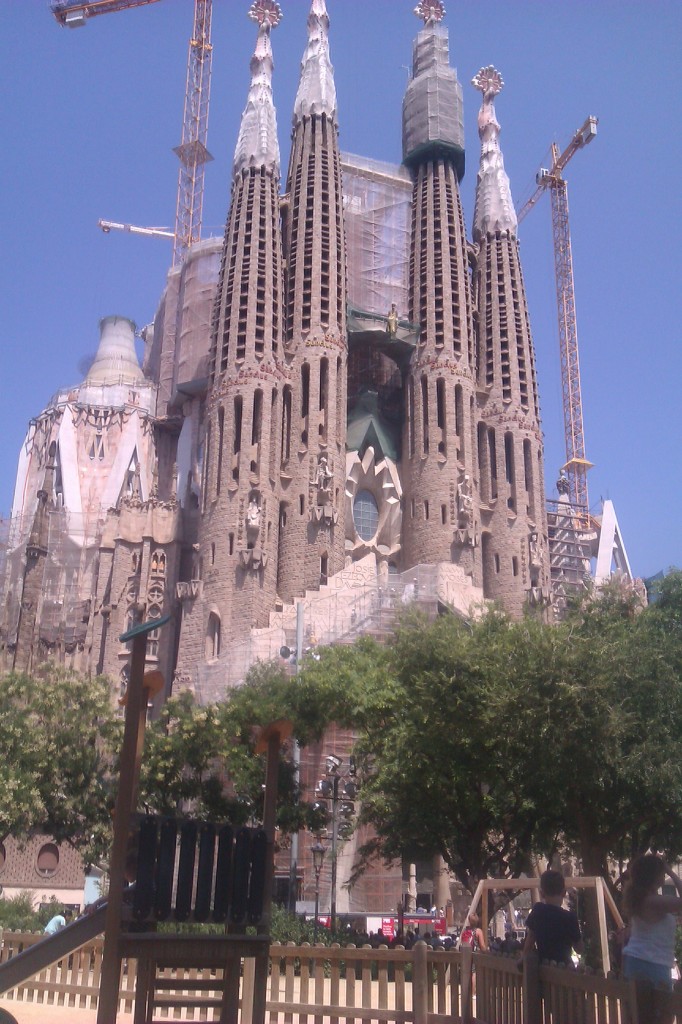 I began writing this post before leaving to go to a city I first visited in 1990. The end of term mayhem meant I didn’t get round to finishing it and before I knew it I was aboard a Ryanair flight and about to step onto foreign soil for the first time in four years. The last time we had flown was when our daughter was just over a year old and the flight was memorable for the fact that she screamed for most of the flights both ways. We both felt the time had definitely come to brave it again and so we resignedly booked and paid for three people this time (she flew for free on the previous flight). On this occasion the flight was memorable for the fact that we hit a storm over the Pyrenees and I had my worst experience of turbulence so far (hopefully ever). Antonia LOVED it! Her squeals of enjoyment as we leapt and bounced in our seats was matched by my (and several other passengers) screams. Anyway, we survived, cheering as we landed and the holiday properly began.

The weather was hot but pleasantly so, we had acclimatized with our own British heatwave and so we were able to make the most of our time with visits to Montjuic, Barceloneta, Parc Guell and the Barrio Gotico, soak up the busy touristy atmosphere and appreciate the very different feel of the city depending if you are by the sea, in the crazy bustle of the city centre or up in the tranquility of the trees in the hills. 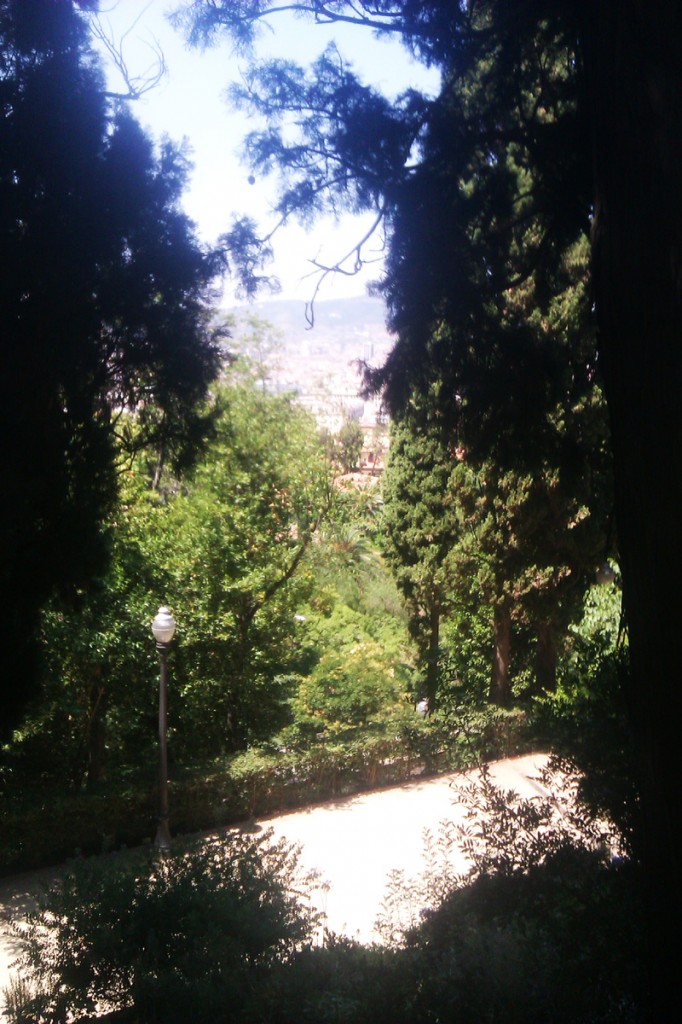 I remember my absolute delight and amazement the first time I saw Gaudi’s buildings. It was a joy to point them out to my 5 year old daughter and discuss if they looked like beautiful cakes, or human bones, or glittering fish, or exotic fruit. Mostly she compared them to princess’s towers, but I could see they really caught her imagination. More so than the the etchings of Joan Miro which we were lucky to see in an exhibition at the superb Fundacio Joan Miro whose work was really where it all fell into place for me as a rather isolated art student on exchange to Barcelona University back in 1990.

Back then Barcelona was not the the tourist hotspot it is now. I stayed in a tiny top floor flat on Carrer Del Comte D’Urgell. Most of my time was spent walking about the city alone with my headphones on, listening to local radio which like any local radio seemed only to have about 6 songs on repeat, interspersed with endless commercials which were completely meaningless to me with my virtually non-existent Spanish or Catalan. I came to know the jingles by heart though and also became very fond of Al Stewarts ‘Year of the Cat’ and Joni Mitchells ‘Chelsea Morning’ played repeatedly, which took on great significance during these rather lonley weeks. Eventually I found the Fundacio Joan Miro up on Montjuic, so much more welcoming than the University and from then on spent most of my time there immersing myself in the atmosphere of the minimalist white box like building filled with light and Miro’s primary coloured paintings and sculptures. It was his works of the 1920’s and 30’s that captivated me in particular and gave me the confidence to become much more experimental in my own work. Although the work I do these days is very different to the strange relief sculptures of my degree days, I think my love of bright bold colour and a sense of fun and playfulness in my work comes from that time. 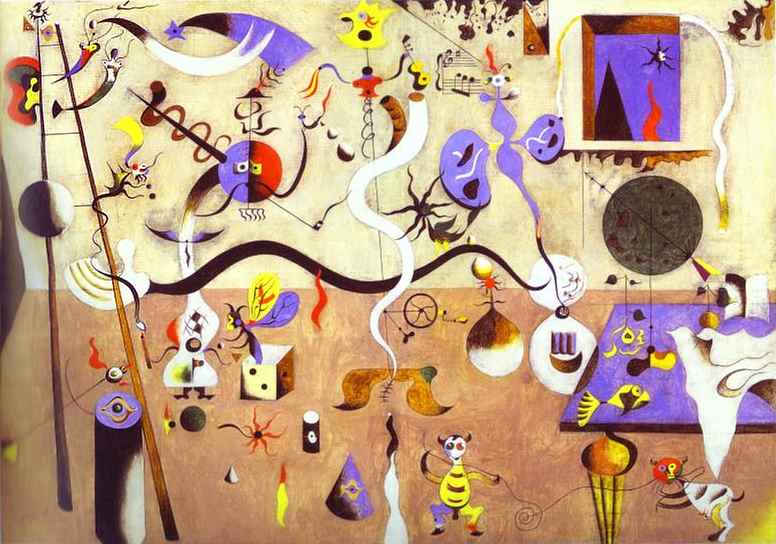 One aspect of Barcelona we hadn’t really appreciated before was the fact that it is the place to go if you are into skateboarding. My husband had packed his skateboard in anticipation of this and he was bowled over by the fact skateboarders are not treated as pariahs in Barcelona. Skateboarding seems to be regarded as another sport like cycling, rollerskating, etc not the pastime of social outcasts. If you like skateboarding and haven’t tried it in Barcelona then I would say its an experience not to be missed. We stayed in an area called ‘The Forum’; a slightly futuristic post-Olympic development on the edge of the city running along the coast, it seems to have been built with skateboarding in mind. 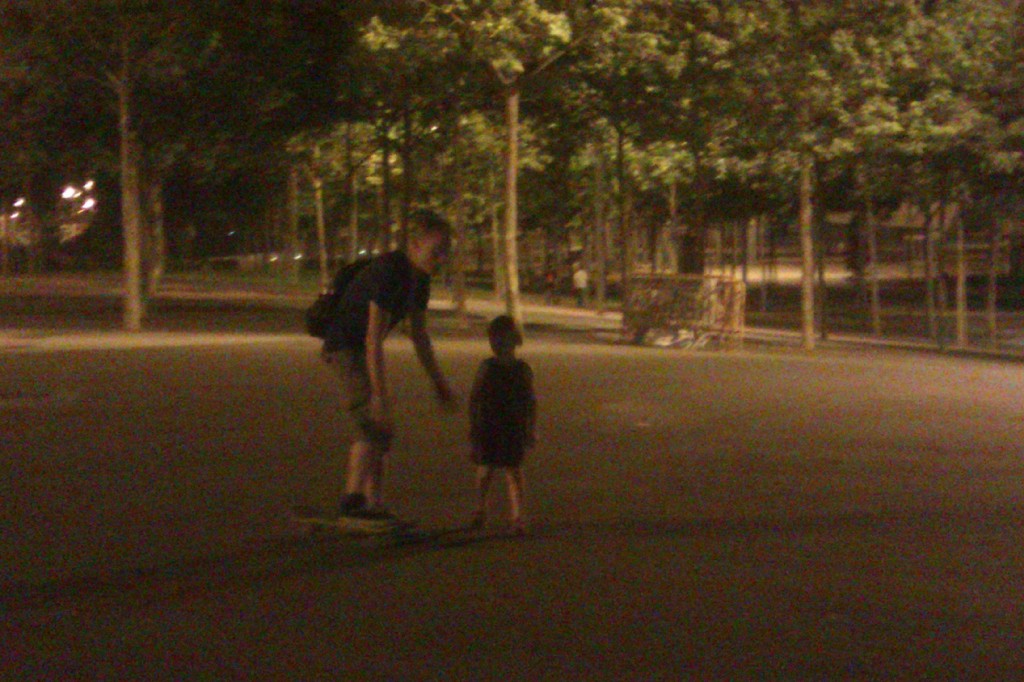 Inspired and excited by the prospect of five weeks of our holiday still to go we returned after a week in time for my stall at Mary Marvellous Vintage Fair. The flight back was not without incident but now with time passed, we are recounting the flying experience with relish and enthusiasm. Like all bad experiences they are much more fun in the re-telling!

Had a lovely catch up with @iamjennywren including

Sewing and listening to the radio.

I’ve had a really good day of being in creative

Work in progress. I had a very happy day mono pr

From my observational drawings of flowers this wee

Inspired by my morning with @palimpsestparade Tans

Today I met up with @palimpsestparade in Sheffield

It’s about 170 days until my exhibition at @cupo

I’m really pleased with my new website that has